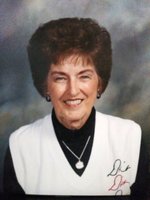 Marjorie “Marge” Louise Churchill was born at home to David A. and Olive Zink Bergtholdt in Carthage, South Dakota.

Marge met and married Frank Churchill in December of 1943 in St. Louis, Missouri. They were married for 63 years before he proceeded her death in 2007.

A few years after Frank got out of the Navy they moved their young family to Reseda, California in 1953. Marge was a stay-at-home Mom until her youngest was in Jr. High at which time she launched her career as a merchandiser at JCPenney. She was a fashionista for sure.

In 1968, Marge and Frank moved to North Plains, Oregon. They built a beautiful home and continued their careers. Marge worked at the Hillsboro, Oregon JCP store until transferring to Coos Bay, Oregon then back again to Mall 205 in Portland, Oregon. Then after almost 30 years, Marge retired from JCP. While Marge was still at JCP she worked part-time assisting Frank with appraisals for his reality business, but went full-time after her JCP retirement.

Marge was a kind and elegant woman who always dressed like a million dollars. Her great passion was painting, golf and her golfing friends and her cats.She even accomplished 2 Holes-In-One during her golfing days, playing until 90!

A celebration of Life will be held at noon on Thursday, January 17, 2019 at Valley Hope Community Church, 2233 E. Main St, Hillsboro, OR. Interment will be at Valley Memorial Park Hillsboro, OR.