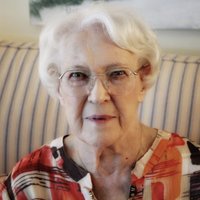 It is with great sadness that the family of Annemarie Margareta Miller, a resident of Hillsboro, OR, shares the news of her death on the 1st of September at home.

Annemarie was born to Josef and Anna Sturm on June 10, 1929 in the village of Oberreifenberg in the Taunus Mountains of Germany.  When she was eight, the Sturm family moved to the town of Bad Homburg, near Frankfurt, Germany. She grew up in a musical family and studied piano and violin. At the age of 13, she auditioned and was accepted as a student at the prestigious Hoch’s Music Conservatory and Academy in Frankfurt. She studied there until March 22, 1944 when the academy was destroyed in a night-time bombing raid that she survived. Annemarie then apprenticed as a Kindergarten teacher.

In 1946, she met the love of her life and future husband, Bruce Miller, from the San Francisco Bay Area, who was stationed in postwar Germany. In December of 1948, they moved to the United States with Baby Nancy. Annemarie often described the emotional experience of standing on the deck of the military transport ship to see the Statue of Liberty as they pulled into the harbor of her new home. She could not comprehend the new freedoms that were presented to her that had never before been part of her life. At the age of 19, she had already experienced enough history and drama to last a lifetime.

But much more was to come. She marveled at the bounty of California and lost her heart in San Francisco. She bravely stayed behind to raise Nancy and her little sister, Diana, when Bruce was sent to Korea in 1952 for 13 months. She and the girls lived in Hayward, CA with the family of her sister-in-law where she cared for all six of the young children living in the household. At the age of 24, she and their young daughters were off to Japan where Bruce was stationed after Korea. There she taught Japanese war brides how to cook for their American husbands. A third little girl, Pamela, was added to complete their family. In 1955, the family returned to California. After ten years of separation from her German family, the Millers returned to Germany in 1958. There they served two extended tours that enabled their children to immerse themselves in their German heritage. Sadly, she lost Bruce, her “Knight in Shining Armor”, in 1998. After a total of 33 lifetime moves, Annemarie settled near her daughter, Diana, in Oregon where she has resided for the past twelve years. Her kindness and sweet nature are remembered by every person whose lives she has touched.

She is survived by three daughters; Nancy (Tom) Brachbill of Shelbyville, IL, Diana (Michael) Daggett of Hillsboro, OR, and Pamela (Kenn) Allen of Decatur, GA; 12 grandchildren and 19 great-grandchildren; a brother, Walter Sturm, of Westfield, MA; and a sister, Brunhilde Fritz of Pasadena, South Australia.

Memorial gifts may be made to the Cystic Fibrosis Foundation.

Valley Memorial Park, in Hillsboro, OR has been entrusted with arrangements. Annemarie will be buried with her husband following a private family graveside service in the Fort Benning Main Post Cemetery in Columbus, GA.