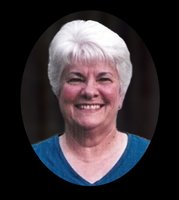 Janice Kaye Sleeper died at home peacefully, surrounded by family on Sunday, January 25, 2020, at 7:12 am, after a courageous journey with breast cancer. Born Janice Kaye Hutson on August 6, 1942, in Bristow, Oklahoma, she was the first born of Floyd and Faye Hutson and the first grandchild to delighted grandparents, as well as doting aunts and uncles. She is survived by her mother, Fayedell Lewis Hutson, age 96; son, Richard Dean Romig (Jackie Romig); her daughter Janna Nicole Oberg (David Oberg), stepdaughter Bonnie Sleeper, grandchildren Jared Oberg (Mattie Grace), Jenny Preato (Rick), Courtney Oberg, Sarah Oberg, Robbie Romig, Logan Romig (Crystal), Annie Romig (Tanner), Knikki Swartwout (Travis); great grandchildren Kayleah, Broden, Aiden, Josiah, Bryson and Ethan, sisters Sharon Faye Williams and Judith Dianne Rydman and brother Timothy Lewis Hutson. She is also loved by numerous nieces, nephews, great nieces and nephews, cousins and one goddaughter. Janice moved with her parents and sister Sharon to Tulsa, Oklahoma when she was young and received her education in the Tulsa public school system. The family moved to Coffeyville, Kansas in 1959, graduating from Field Kindley High School in 1960. While in Coffeyville, she entered and won the Miss Coffeyville pageant, before moving on to become first runner up in the Miss Kansas competition—the preliminaries to Miss America. She attended Coffeyville Junior College before returning to Tulsa where she worked as a secretary for an oil company, living with her grandmother, Zula Larison. On April 6, 1961 she married her love, Richard Dale Romig, whom she met when living in Coffeyville. Janice and Richard wed and worked in Tulsa until moving to Washington where she held secretarial jobs until the birth of their first baby, Rich in 1964; daughter Janna followed in 1968. They moved to Vancouver, BC for a couple of years before relocating to Portland, Oregon. After owning two homes in town they fell in love with a little red farmhouse in Gresham, Oregon. Janice and her family lived happily on that acreage until a year after her love, Richard’s passing in 1986. She and Janna then moved to Hillsboro where she worked in the high school library as she had done at Barlow High School. Janice married Chuck Sleeper in 1996, continuing to work as library secretary after his death. She retired in 2007 and continued to live in her Hillsboro home, enriching the community around her: volunteering at a food bank, contributing resources to numerous organizations, serving friends in many capacities, sharing in her faith community and traveling whenever the opportunity presented itself. She was at her happiest visiting and doting on her children, grandchildren, and great grandchildren—reveling in their achievements, dabbing her eyes at their milestones, loving and sharing life with her siblings and their children’s journeys. Janice also found solace in bringing comfort to her mother through the transitions of aging, embracing the residents at Rosewood Park Assisted Living, her mother’s home, as though she was one of them. And she was ever smiling with grace as the precious Kaiser Hospice team entered her world to help her through the last three months of her journey home. Janice was preceded in death by her Dad, Floyd Wesley Hutson, her husband Richard Romig, their two angel babies, one angel great grandbaby, and second husband Chuck Sleeper. She is lovingly laid to rest, awaiting the sound of the trumpet, at Valley Memorial Park in Hillsboro, Oregon. In lieu of flowers the family has suggested that any contributions be made to Samaritan’s Purse. https://www.samaritanspurse.org/