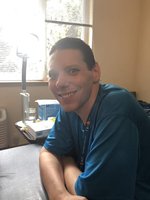 Thomas Richard Russo-Giblin, was born on May 6th, 1979 in San Jose, CA, and then moved to Aloha, OR. @ 6 months old, where he grew up. The Earth trembled when Thomas was born and soon after arriving in OR the volcano blew its top & more. There were definitely heavy-duty forces surrounding Tommy early on. Those forces continued to circle Thomas throughout his life. Tommy hit all his milestones in life early and with a force that allow him to get to the top each time. Thomas went to Hazledale Elementary, Mt. View Jr. High and then Aloha High School from 1993 to 1997, following after his Mother. Tommy was an A student and always worked hard to make sure his schoolwork was done; his room was clean & his laundry was folded and put away. Tommy was the type of kid all mothers would love to have. You never had to tell him to do anything. He had it all done before he was asked to do it. Tommy liked everything neat & clean & organized in his life as a child and adult. Tommy’s number one love was playing baseball. He started in T-ball as soon as he was of age and he played until his Jr. year in High School. Tommy was a super good pitcher. He could strike out 3 batters in a row and that was for each inning. He was one of the number one pitchers in the area. He had his fast ball and drop ball, but his specialty was the curve ball taught to him by Jim Brennen, and he loved to use. And no one could hit his pitches. He was a very good pitcher and he was being watched by the scouts. We were a baseball family 110%. Then towards the end of his Junior year of High School, he became ill. A mental Illness started surfacing which turned out to be Bi-Polar & Schizophrenia. His life turned upside down and there was no more baseball. In fact, there was no more normal in his life for 2 decades. Tommy was gone & out of touch for almost 20 years, but he resurfaced and reunited with his parents & brothers about 6-7 yrs. ago and we were all happy to have that time with him. He was always upbeat, happy most of the time, always smiling, always giving you, spiritual & healing advice and he was just a genuinely sweet, kind soul to everyone he met. He then got cancer, which spread throughout his body and eventually took his life over a 2 yr. period. Thomas felt that he lived a good life, even after the hard life he had been given. He loved GOD very much and he now rests in GOD’s house. RIP Thomas. We all LOVE you.