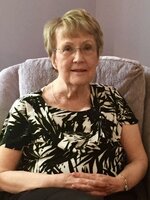 Kathleen Lynette Wilcox was born on June 19, 1937 at Wilcox Memorial Hospital in Portland, Oregon, the first-born of Keith & Lynnette Wilcox of Hillsboro, Oregon. Kathy grew up primarily in Hillsboro, with brief stints in New York and Arkansas due to her father’s Navy service during World War II. After graduating from Hillsboro High School in 1955, she attended Oregon State University, where she received her bachelor’s in Business Education in 1959. Kathy married her high school/college sweetheart, Milton E. Thurman, Jr. in May 1959 while he was serving in the US Navy. After honeymooning on the Oregon Coast, she returned to Corvallis to finish her degree, then took a cross-country train to join Milt in Pascagoula, Mississippi, where he was stationed. Later, they moved to San Diego, where Kathy gave birth to their daughter, Debi, in 1960, and the family eventually moved back to Hillsboro in 1961 when Milt was discharged from the Navy. Back in Hillsboro, Kathy & Milt built a home on land adjacent to Keith & Lynette, had a son, David, in 1964, and set about building a happy family life. In 1971, the family moved to Newton, Kansas where Milt started a business manufacturing electronic test equipment he had invented while working at Tektronix. Kathy learned to design printed circuit boards to support the business, a skill that kept her well-employed when the family returned to Hillsboro (and both Kathy and Milt returned to Tektronix) in 1972. Having demonstrated a keen analytical mind in her circuit board design work, Kathy caught the attention of managers charged with building a business software product line at Tektronix. After a brief training program, Kathy became one of the first female software developers at Tektronix. In 1978, Kathy and Milt both obtained their MBAs from University of Portland, and Kathy transitioned into the world of corporate finance. She eventually ascended to the role of financial controller for the Tektronix’ Information Display Group in Wilsonville. Kathy moved from Hillsboro to Beaverton in 1990, a few years after Milt’s passing, primarily to be closer to work and have a smaller yard to care for. She retired from Tektronix in 1996 and spent her retirement years traveling the world with friends and family, enjoying the company of three dogs, hosting annual “Granny Camps” with her sister for their grand-daughters, artistic quilting, gardening, building family memories in her Sunriver vacation home, and enjoying the great outdoors. An avid traveler, Kathy visited Europe many times for business and pleasure, especially to visit Debi while she was stationed in Italy. She took her granddaughters to England, France, Norway, Belize, and Mexico. For her 75th birthday, she took her extended family on a trip to Puerto Rico and the Caribbean. Iceland, China, Australia, Egypt, Panama, Peru, Tunisia, Turkey, Austria, Croatia, and Russia were among her global explorations. Kathy is preceded in death by her husband, Milton E Thurman, Jr., and by her parents, Keith and Lynnette Wilcox. She is survived by her brother, Ronald Wilcox of Portland, by her sister, Dixie Wilcox Piland of Niwot, CO, by her daughter and her husband, Debi and Chris Mollahan of Beaverton, by her son and his wife, Dave and Ali Thurman of Seattle, and by her granddaughters, Kira Thurman in Eugene, Celia Thurman in Clallam Bay, WA, and Natalie Mollahan, NC, grandson, Nathan Mollahan in Damascus Oregon, and great grandchildren, Alyssa Kasbashian, Faith Mollahan and Bobby Mollahan. Kathy passed peacefully on Thursday, August 5, 2021, after a brief bout with persistent pneumonia, leaving life as she lived it, with a quiet but fierce independence. A Celebration of Life will be held on October 2, 2021 by invitation only due to the on-going pandemic. Please contact Kathy’s son, Dave Thurman (thurmanator@gmail.com), if you wish to attend.