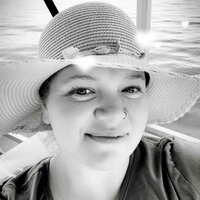 Our beloved Julie left us to become our guardian angel on August 24. Julie was welcomed into this world by her parents Candido and Sally Mendive and sister, Adrienne. Julie was born and raised in Elko, Nevada. She attended Elko High School graduating in 2003. While in high school she was a member of the Elko High School Band of Indians and concert band. Participating in band was the highlight of her high school years. She truly enjoyed all the traveling, performances, and camaraderie with her fellow band members. Julie was also a member of the Elko Basque Club Arinak dancers from the time she was four, learning many cultural dances and performing in multiple Basque festivals. In 2005 she moved to Coeur d'Alene, Idaho, and met Robert Barrett who would become the love of her life. They married in October 2011. Robert and Julie have two children Amaya and Jamie. They lived in Post Falls and Boise, Idaho then settling in Hillsboro, Oregon. Julie decided to continue her education and enrolled in Portland Community College earning an associate degree in Applied Science and an associate degree in General Studies. While enrolled at PCC she studied American Sign Language and photography. She discovered a hidden talent in photography with a very creative eye in executing her vision of what could be. Since graduation she has worked for Fidelity Collections Agency. Julie was a very caring person who would help anyone in any way she could. She was a wonderful mother and fierce advocate for her daughters. She was encouraging and supportive of her husband in his educational pursuits and hobbies. Julie had a great sense of humor and found humor, irony and sarcasm in any situation. She was quick-witted and turned many social occasions into hysterical laughter. Julie was proud of her Basque heritage and enrolled in an online course of the Basque language a year ago. Robert, Julie, and their daughters become avid fans of the Portland Winterhawks and attended as many home games as possible with Julie ringing her cow bells. Julie was pre-deceased by her grandparents Bert and Betty Tooley and grandfather, Prudencio Mendive, Jr. She is survived by her husband Robert and two daughters Amaya and Jamie, Hillsboro, OR; parents Candido and Sally Mendive, Spring Creek, NV; sister Adrienne Mendive, niece Alexis Mendive and nephew Gaige Mendive, Spring Creek, NV; grandmother Mary Lou Mendive, Boise, ID; aunts Sheila Siegler, Darlington, WI, Darlene Henderson, Washington, IL, Marilyn Hansen, Ft. Wayne, IN; uncles Steve Mendive, Boise, ID, Mike Johnson, Brownsville, TX and Gregg Johnson, Nashville, TN; father and mother-in-law Tom and Dorothy Barrett, brother and sister-in-law Thomas and Megan Barrett, niece Maggie Barrett and nephew Alex Barrett, Post Falls, ID.