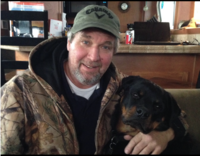 Thomas Sean Hogan June 10, 1959 - September 23, 2021 Sean was born in Tillamook, Oregon to parents, Jack Thomas Hogan and Evelyn Kay Shidler. Shortly thereafter, the family moved to Portland. After attending various schools during his childhood, his high school years were completed in Dayton, Oregon. Sean was an inventor and patent holder of his underground wireless guidance system for Savant. He worked most of his life in the heavy machinery industry and was employed by DitchWitch Northwest/Pape. He was a top salesman for the company and enjoyed his work. Sean was extremely clever and able to take on tasks that many would never even attempt. He built from scratch a 70' steel trawler that he and his wife Ginny lived on for 11 years at Scappoose Marina. It was enjoyed by their family and friends. He enjoyed fishing, camping, riding his motorcycle, and going to Dune Fest each year down in Florence. Sean and Ginny were together for 31 years, 28 of those being married and raising seven children; Jack King O'Neal, III, Joseph Daniel O'Neal, Brandon Sean Hogan, Mark Britton O'Neal, Shara Dawn Hogan, Adam Malcolm O'Neal and Connor Lee Hogan. As a grandfather he was known as “Captain” to 20 beautiful grandchildren. Sean passed away peacefully at his home after fighting an 8 month battle with lung cancer. He was surrounded by his family at his bedside. He was a loving husband and father and an honorable true friend for those lucky enough to have him touch their lives. He will be forever loved and missed.