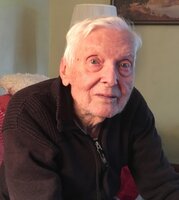 Rudolph Kraker June 15, 1920 – October 8, 2021 Rudolph was born in Austria in 1920. He came to the United States in 1922 with his parents, Frank and Sophie. He grew up in the Brooklyn area and joined the Army in 1944. In 1945, he married Eleanor Weixler. Rudy was a very skilled Tool and Die maker and worked for Sperry Rand Corporation. After moving the family to Oregon in 1965, Rudy worked for Tektronix until his retirement in 1986. Rudy was an avid outdoorsman and hunter and got a nice buck deer at age 92. He also enjoyed working on and repairing old, antique guns. Rudy was a devout Catholic and regularly attended service with his wife of 72 years Eleanor, who preceded him in death in December of 2017. Rudy leaves behind his three sons, John, Richard and Thomas and a grandson Mathew. Memorial contributions can be made in his name to the “Bonnie Hayes Animal Shelter”. A viewing will start at 10:00 am on Thursday, October 28, 2021 followed by the funeral service at 11:00 am at the Valley Memorial Park Funeral Chapel, 3929 SE Tualatin Valley Hwy, Hillsboro, OR 97123.