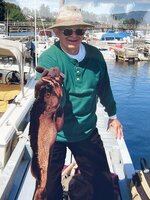 Benjamin Wesley Watkins, 91, of Hillsboro, Oregon, passed away on November 8, 2021. Ben was born on February 6, 1930 in Portland, Oregon to Bernice and Percy Watkins. After graduating from Fife High School, he went on to study pharmacy at the University of Washington. He was an enthusiastic life-long Husky fan. In November of 1952 he entered the Army and served in the Korean War. After the war he returned to his job as a pharmacist at Payless Drug Store in Richland, Washington. This is where Ben met and married his wife Mazie Lockart and went on to have five children. Ben and Mazie moved to Hillsboro, Oregon for Ben’s job with Economy Drug. He went on to purchase Economy Drug which was the beginning of a long career as a business owner and pharmacist. Ben was a passionate gardener and fisherman. He spent most of his retirement tending to his garden and never passed up the opportunity to catch a fish. Ben was predeceased by his wife Mazie, and parents Percy and Bernice. He leaves behind his five children, Craig, April, Ben, Dana, and Eric. At this time the family requests no donations or flowers be sent.