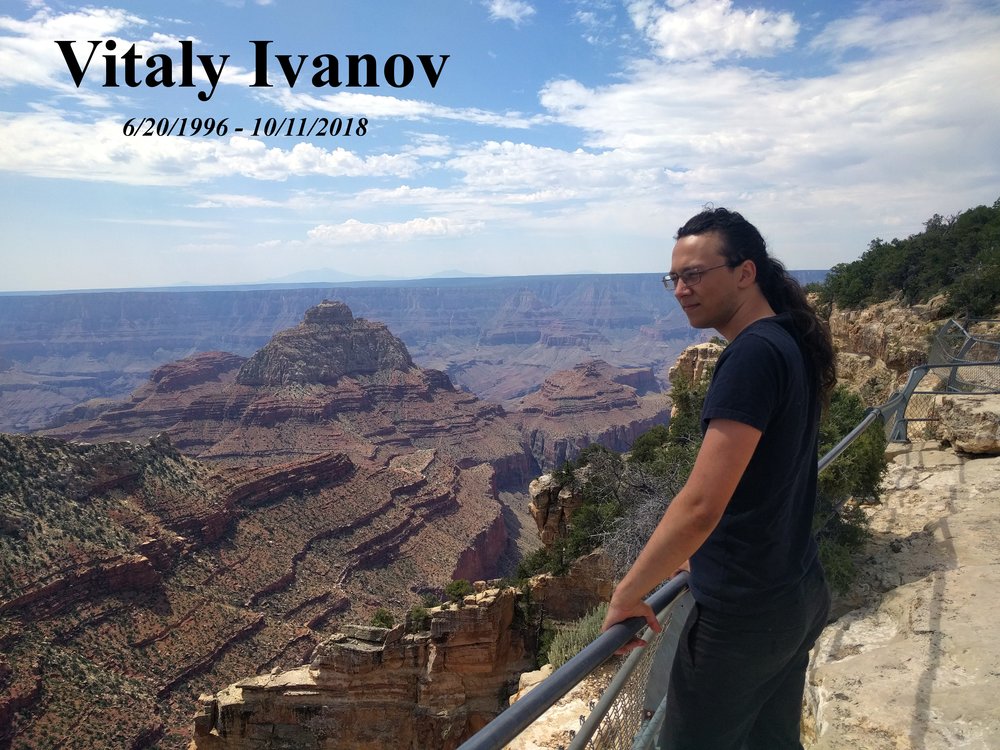 Vitaly Alexander Ivanov was born on June 20, 1996 in Longview, Washington. He was a great delight to his parents, Alex and Nelya. He was raised with five siblings: Leo, James, Mila, Victor, and Gloria. His name Vitaly was given by his Grandma Vera. His Grandpa Fridrikh called him Genghis Khan which gave him some feelings of royalty. He loved to be called Vit by his siblings. During his younger years he attended church with his family and studied the Bible at Sunday school. Since his childhood he loved adventures and explored local parks with his dad and younger sister.

In elementary school he demonstrated a strong and competitive character. As years progressed he developed more gentle and soft personality. He started to spend more time at his computer than outdoors until his oldest brother introduced him to joys of hiking trails.

After completing two years of school at Portland Community College, Vitaly moved to Corvallis to continue his education at Oregon State University. After studying there one semester toward a degree in Computer Software Engineering, he decided to take a break for personal development and world exploration. He traveled to Japan twice and Thailand once. He wanted to learn different ways of living in other cultures. He studied Japanese language and loved Thai food. He had a passion for cooking and baking.

He shared his experiences with family. His siblings admired his ability to listen to their concerns and provide wise advice. They were often amazed at his very well-articulated messages. He lived with integrity and uplifting attitude. Vitaly asked his mother, “Mom, what are you grateful for today?” and his siblings loved to hear from him, “Feel Goood!” He loved to listen to melodic music and was practicing playing a flute.

His last year of life he spent traveling around the United States. He visited many beautiful places and expressed his admiration at the beauty of sunrises and sunsets. His love for nature brought him to a stunning Black Balsam mountain top with a spectacular 360-degree view in North Carolina. Tragically, he was overtaken by a strong storm which he could not endure. He died on October 11, 2018. Vitaly was twenty two years old. He is survived by his grandmother, mother, father, sister and three brothers. His younger sister died six months earlier.

He had a beautiful soul and was loved dearly. He will be missed greatly by his family, relatives and friends.

Vitaly’s final resting place is in the Peace Garden by Swan Lake at the Valley Memorial Park in Hillsboro, his hometown.

Viewing and graveside service will be held at 11:00 AM on October 29, 2018 at Valley Memorial Park in Hillsboro. Any help will be greatly appreciated.
Contributions are accepted here:
https://www.paypal.com/pools/c/88QXC95Yqc